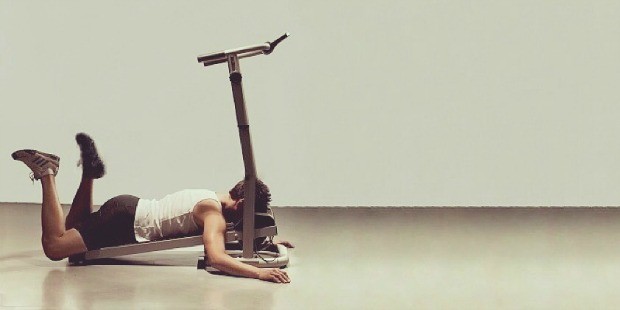 It was a stressful day. Not for the usual reasons but because of the absurdities involved in being a personal trainer. That day I arrived to work not knowing we had a “staff meeting” so when I arrived at my normal scheduled time, I was already a half-hour late for the meeting. I was chastised with a disapproving look from the General Manager who then ushered me into the meeting being attended by all the personal trainers. Inside, Fitness Director Mike was standing in front of a whiteboard and leading the meeting. He was asking all the personal trainers what would be an innovative way to improve the interpersonal contact we had with club members during our floor shifts. In response, one trainer stated something about leading a session to teach isometric conditioning so as to develop symmetry and achieve more tonal definition. Next another trainer stated something about training with a bosu ball to teach enhanced balance and increase core strength. Then followed my favorite trainer, Julie, who felt was my “work bestie” and thought the feeling was mutual as she was always nicer to me than the other trainers. Julie wanted to incorporate free-motion elastic bands into a short, yet highly intense resistance regimen, which I thought was the most admirable and physically beneficial of all the plans. Anyway, so it went, down the line with each trainer providing a description of their individual, customized session plan.

The personal trainers were all using various fitness terminology I wasn’t familiar with and so when it came to me to state something, I panicked. Before I had time to consider my answer, I blurted out “I want to have a jump rope contest!” Fitness Director Mike looked at me like I was clearly kidding. When I didn’t correct myself and just continued to stare at him without offering up any further explanation, he at last understood that I was being serious and said,“Um, ok…why not?” and wrote JUMP ROPE CONTEST in capitals next to my name on the board. I didn’t dare shift my focus away from the whiteboard for fear of catching glimpses of the other trainers. I could feel their eye rolls and “what the fuck?” expressions in response to my “fitness plan.”

Unfortunately, my off-the-cuff answer couldn’t just be a fleeting transgression easily forgotten when the meeting ended. This was due to some unwritten rule that a fitness facility must contain an extreme amount of colorful signage throughout with images of clearly insane people wearing an effortless smile, or even heartily laughing while engaged in some form of strenuous movement. While these images are meant to be inspirational, I feel sad for the people in those posters because as someone with exposure to various psychiatric ailments, I know that when people are donning such maniacal expressions of delight while engaged in some form of painful exertion, they are likely afflicted with exercise addiction.

Anyway, for the reason that the promotion of every idea or conveyance of any thought in the gym world necessitates making a sign, shortly after our fitness meeting, there was colorful and excessively large sign-up poster for the different “impromptu” fitness sessions to be led by various trainers the following week. Next to my name it read JUMP ROPE CONTEST!!!! I cringed every time I walked by that sign-up poster. I don’t even like to jump rope! Why did I blurt that out?! I knew that I certainly didn’t want to lead a session with people actually wanting to participate in an adult jump rope contest because such people would clearly be unstable individuals.

I wasn’t all that concerned about looking like a fool. Well, at least not in the sense that I wouldn’t have sufficient stamina to jump rope for an entire session. I had done more rigorous and odder “exercise” in the past. I remember when I was in boarding school, every time I was about to fly home during one of the school breaks, I had this ritual for good luck. To better my odds of having all my flights arrive safely at their destination, I would climb the stairs up to my dorm room exactly sixty-four times in a row. Now this may sound trivial, but these weren’t ordinary stairs. The building I lived in had been built a few hundred years earlier, and before it was re-purposed as a boarding school dormitory, it was a villa where the nobility of the region resided. Consequently, the unimaginative name of Villa da Nobli was given to my dorm.

In Villa Da Nobli, the most efficient way to get to the boys’ floor where my room was located was to use the servant stairs. For whatever reason, when Villa da Nobli was built, it was thought that servants of that era weren’t averse to using excessively steep, unreasonably narrow, and exceedingly precarious stone steps. Oh and servants must also not have been afflicted with any form of vertigo, because the steps spiraled upwards at 360 degrees. Anyway, these steps were already quite the workout for my weak adolescent legs, but climbing them in sixty-four continuous repetitions was even more of a challenge for my awkward, scrawny frame. Yet if I wanted greater assurance that my plane wouldn’t plummet, the repetitions had to be done each time before I was to fly. And if I messed up in the counting part of the way in, I would have to start all over again because according to my mental calculations, sixty-four was somehow derived as the ideal lucky number for that very crucial task and the miscount of even one step in one climb would invalidate the equation and render the whole exercise futile.

In retrospect, I can clearly see that my pre-flight ritual during my boarding school days was no act borne of common superstition, but an early indication of the more severe oddities I would be compelled to perform later in life all due to OCD, my future partner in ruin.

Yet at the present moment, that memory afforded assurance as well; mainly that despite my newfound repugnance to aerobic activity, I would be still somehow capable of performing the absurd task of excessive jump-roping in front of an audience.

Just as I was feeling more confident about my aptitude as a personal trainer, Julie walked by me, tilted her head to one side, and with a bright, wide-eyed expression waved to me and said, “Oh hey there Farsh,” just as one would to a kid that was always picked last to play on a sports team. It occurred to me right then that Julie thought I was a special needs person that must have been hired so as to satisfy some human resources diversity and non-discrimination hiring practice. That was also the moment that I knew I needed to start looking for another job, stat.