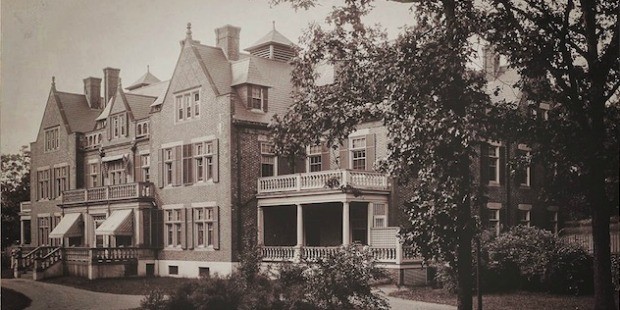 About four weeks had passed since when I first arrived at McLean and I was actually starting to feel good about being there. It was easy to pretend that I was “on holiday” if I felt so inclined. The setting was certainly conducive to imaginative allusion. The New England fall is famously inspiring. After all, the area has bred some of literature and poetry’s more notable and rousing luminaries. Emily Dickenson, Herman Melville, Robert Frost, Henry David Thoreau, and Nathaniel Hawthorne to just name a few, pondered prose among the rich foliage of the Red Maples and in view of majestic White Cedars. And many of New England’s native trees were represented on McLean’s immaculately landscaped grounds, designed by Frederick Law Omstead, who later became a patient himself. Like Omstead, many creative minds resided at McLean at one time or another. McLean was where famed MIT mathematician and Nobel Prize winner John Forbes Nash received treatment at the same time that Pulitzer Prize winning poet, Robert Lowell was a patient. Sylvia Plath wrote her most famous novel, The Bell Jar, borrowing from her experiences at McLean. Even Ray Charles and James Taylor reminisced in popular songs about their time at the hospital. Indeed, it seemed if you were a patient here, it was unlikely that sometime in your past you had trapped possum or auditioned for a reality show.

The beauty of the grounds was augmented by the architecture of the buildings. The buildings resembled the kind of mansions that housed generations of moneyed New England families. Peeking through the ivy that covered the huge brick and stone structures, were menacing stone gargoyles and turquoise-oxidized copper gables. The imposing structures were all architecturally unique and varied in size, but they matched enough so that there was a tasteful uniformity throughout the grounds. While I came to McLean because of its eminent reputation as the premier psychiatric facility, I admit I also wanted to get better at a place where I could half-pretend I was on a “rest vacation.” Here I could fool myself into supposing that I would be spending the next several weeks at a special country club.

At first even the patients/club members in my ward/club-cottage themselves made the fantasy easy for me. Upon my arrival, I immediately noticed how self-aware and socially apt the other patient-members were. No one was walking around like a zombie with drool spilling out of their mouths. On the contrary, these patient-members were intelligent, witty, gregarious, and charming. Many were very well educated and well-off, perfect for the pretentious elitism my country club reverie required. My co-members and I debated the merits of Proust as being a genius versus a verbose justifier of a lifetime’s worth of failures. We played chess and Cranium. We drew sketches and taught each other how to play musical instruments. We read and watched foreign language films. We collectively pretended.

I remember one evening not long after I arrived, we received a new member. By the afternoon on the day of his arrival, I learned that he was a student at Harvard Law School and had taken an allowed temporary leave from his studies to come here. He was well dressed and well spoken, good-looking, and seemingly confident. He also appeared to be fit and athletic which would come in handy as that evening was an exercise night. On exercise nights, we made our way to the recently renovated athletic facility and then broke up into groups depending on the activity we choose. I usually chose basketball and my team needed some serious shoring up. There’s only so much poor coordination certain team members could attribute to the side effects of medication until it becomes plainly obvious that meds or not, those members should engage in a different activity requiring less hand-eye coordination. And this from me, a guy whose basketball skills were more suited for a game of H-O-R-S-E.

I planned to recruit our new arrival on my team and see if tonight’s basketball session would yield a new winning team – mine! As the evening approached, I could see our new guest was still hesitant about being at McLean. Very natural. My own initial impulse was to flee and I even called some friends to get the assurance from them that doing so would be perfectly justified. Thankfully they talked me out of it and I stayed. The first day is very hard. So I talked to the new guy and relayed my recent arrival experience to empathize with his current state of mind and show that we had all been there. He almost acted like he didn’t need the pep talk, felt comfortable already, and would be just fine. I didn’t know if his claims of premature acclimation were misplaced bravado or self-delusion, but I knew they weren’t sincere.

That night as we made our way to the Health Facility, the counselor decided to take a short cut as it was rather cold outside and he didn’t want to take the tunnels. He led us out through a back door of our unit and into a stairwell. Immediately there was a tangible shared sense of solemn reticence among us. The “well” part of the stairwell had been made inaccessible by steel bars that ran from the basement level up to the third floor of the unit. I suppose should anyone be inclined to hurl themselves over the banister and freefall to the floor, the bars would serve as an ominous visual deterrent and preventive measure. All I knew is that the bars made me feel like I was in a prison or a cage and that feeling had diminished my sense of imminent country club sport and competition I had cheated myself into believing. When we exited the stairwell and arrived at the external path to the Health Facility, things became worse. Suddenly we were among a group of individuals that were the scariest looking people I had ever encountered this close in real life.

There were men with shaved heads and some sported stringy long hair but I couldn’t find any with a hairstyle that was a happy medium. Almost all were generously covered in tattoos. Despite the ample amount of security personnel that accompanied them, I instinctively reached out my arm in front of the woman who was walking next to me as one does when one applies the car brakes too abruptly. She turned to look at me and I could see that in all her twenty-three years of sheltered life, this encounter with such an element was a first.

“Guys hold back a minute,” our counselor advised us. Even without his command, all of us would have remained frozen in place until the Gang of Death had passed. As they walked past us, some of them shouted out taunts and even suggestions that were directed toward the women in our group.

“Just ignore them. Don’t stare at them,” our counselor counseled us in a very measured tone of calm alarm. The security personnel accompanying the Death Gang ensured a secure barrier between the patients they were tasked to watch and our group. After they had passed and entered the building we had just left, someone in our group inevitably asked, “Who were they?”

“They’re on the floor right above you guys,” our counselor replied. “It’s a lockdown unit. They must have been running late from their shift at the Health Facility for some reason. They’re not supposed to come into contact with any other patients. Sorry about that.”

The lockdown units were where the most mentally deviant and socially dangerous patients were housed. Some of these patients had criminal records, but deemed “insane” by order of the court and therefore had to be under constant psychiatric supervision and heavy security. Those that weren’t criminals were residing in a lockdown unit because they had been determined to be too much of a danger to themselves or possibly others due to their psychosis and were here involuntarily. These were psychos, literally. I mean they were “psycho” not as in the insult, but legitimately dangerous psychotics. And apparently they lived right above us! How fun!

What the fuck kind of arrangement was that?! I was annoyed. Out of all the many buildings at McLean, why were the psychos housed in ours? Our country club! Staying here was certainly costing way more than any actual country club, that the least they could do was keep us, the “vacationing” pretentious elites, in a separate building than the psychos! My fantasy was fading further as the night progressed.

After our Health Facility session was over we headed back to our unit. Thankfully we arrived without getting shanked by one of our upstairs neighbors that may have accidentally wandered astray. Oh and my team lost the basketball game. Again. Our new guest didn’t even play. He joined the ping-pong group and participated only briefly in their games. Mostly he sat on the sidelines and watched. I talked to him some more on the way back to our residential unit. He was still assuming an air of confidence that was really more cockiness now, as if he was here for the adventure, like on Spring Break or something. Apparently he had concocted his own fantasy.

Later that night after everyone was in bed, I heard voices whispering in the hallway outside of the rooms. There seemed to be some urgency to what was being discussed. Eventually one of the whispered voices turned into whimpering and then unmistakable crying. Not unusual here. Unable to discern what was happening in the hall, eventually I passed out.

The next morning, I noticed our new arrival from yesterday wasn’t present in the morning meeting. After the meeting I asked a counselor about his whereabouts.

“He just wasn’t ready to be here,” was all the explanation I was given. It occurred to me then that the new cocky Harvard Law student of yesterday morning was the same hushed crying I heard while in bed last night. He didn’t even make it through the night. Leaving this place after one day wasn’t uncommon. Coming here was a shock to the system. Accepting your presence as a patient here required tremendous ability to come to terms with the surreal reality with what being a patient at McLean meant. As the counselor said, some people just can’t do it. They aren’t ready.

It’s sad really because I know my cocky brief acquaintance’s reality outside of McLean is far worse than anything being here could ever be. After that day, my country club fantasy seemed too trite to carry on. The real reason I came here wasn’t to rest. It was to change my reality outside of this place. I could watch as many foreign movies and take in the beauty of the grounds as much as I wanted. That wouldn’t somehow reshape or decorate all the non-leisurely time, where I had to engage in taxing and excruciating psychological challenges along with a strict medication regimen designed to get my debilitating OCD under control. Maintaining a false pretense no longer felt right. It was time to come to terms with where I was now. In an insane asylum, as McLean was at one time referred to, living as patient in the unit underneath the psychos.